You wouldn’t believe that this contraption is a new “Cobbler” sewing machine we bought only a few years ago. It is a Chinese version of a “Patent Elastique” or “Claes patcher”  leather sewing machine. Though it looks very crude it sews right through thick leather. I used it to sew the canvas roof for the Wolseley Ten.

Weird and ingenious Ward Arm & Platform  sewing machine was patented in 1873 and produced from 1875 to 1895. By Edward Ward London . The platform hinges downwards to convert the machine into a free arm.

This old lady was probably manufactured around 1892. It is obvious why this is called a “Serpentine“or “Swan neck“machine.

Fiddlebase tells me “Helvetia” was a Swiss manufacturer in Luzern from 1895 to 1966 also connected to the development of the Dutch Fridor machines. This machine seems to have been manufactured a little before 1966. It is a very nice reciprocating shuttle machine. The colour is very similar to our Fridor.

The script on this machine shows “Hestia“. Some sources say this is manufactured by “Helvetia”.  This machine is complete and seems healthy and free. The cabinet is worn, but still very nice. In the little cubby I found a bill for some tea towels dated 1941, so I assume this machine was manufactured before that date.

How about this Mercury- Sphinx decoration?

When you start reading about the history of sewing machines you can’t miss the brilliant Elna Grasshopper electric free arm machine. It is so much smaller and lighter than the old cast iron machines. I understand it must be the first electric lightweight free arm household machine. This one was built in 1946 according to the serial number.

A much later Elna is the small Elna Lotus from ca 1970. All accessories fit inside the machine and the sides fold like a lotus flower. Hence the name “Lotus”. 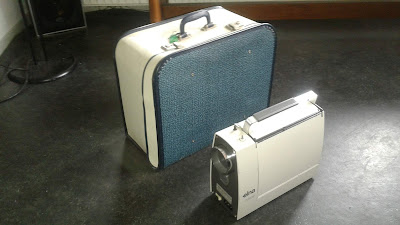 Note how small it is compared to the usual Japanese sewing machine case. 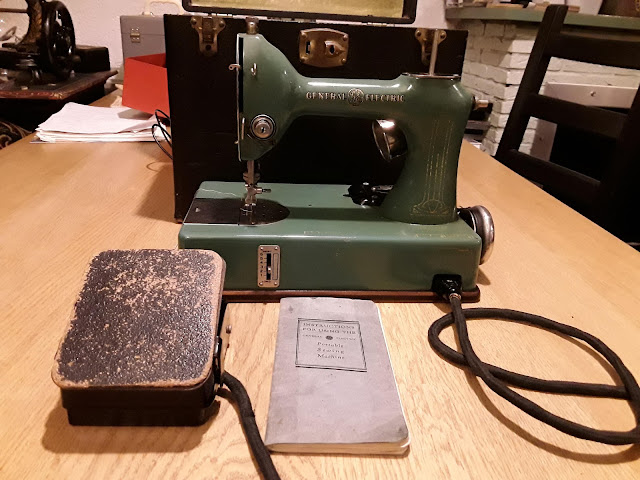 Some say the General Electric Sewhandy is the ancestor to the Singer featherlight machines. But it was first made by Standard in 1928. Interesting to see how the general construction of the later Elna resembles this General electric.

Another interesting machine is this ca 1958 Borletti 1090 from Italy, Designed by Mark Zanusso. This particular machine is the basic straight stitch version.

Of course every collection needs a Singer. This is the Singer 12K New Family. Built in 1887

Even comes with some spare needles!

Singer 12K New Family. Built in 1877. This must be the oldest machine in the collection.

Ca 1894 Singer 28k Vibrating shuttle machine. Probably one of the most copied machines in the world.

Classic Ca. 1910 Singer 15D Treadle. Made in Germany. Another design that was copied by many manufacturers all over the world.

Most sewing machines were expensive so often the were paid for in installments. This is a 1914 Singer 66D installment book dated 1914.

Here you can see the difference in size!

This is the alloy version of the classic Singer 201K. Manufactured in 1956

The Singer 15 NL-K machine manufactured in the Singer factory Taiwan in the Seventies as a “Nostalgia”series. This one was not used much. It looks like a brand-new old 15K. Quality is not as good as the old series.

Singer lock stitch toy sewing machine from the late 1960. This machine makes a full lock stitch unlike the chain stitch most of the other miniature machines do. It uses a transparent version of the boat shaped transverse “vibrating” shuttle very much like the ancient Singer 12.

This Essex miniature sewing machine makes a very simple chain stitch and was manufactured from 1946 to 1956 by the Essex Engineering Works. The design was based on the Singer 20 model.

The Regina Toy Sewing machine manufactured by Muller in  in Berlin in the US-Zone . They had been manufacturing toy machines since 1885. This is a later one manufactured in the Fifties or Sixties. A simple chain stitch, but battery operated.

Gritzner TS. 1899 or 1900. Very similar to the Singer 12 new family, though “high arm”. Due to the success of the Singer machines and strange patenting laws successful machines were copied by many manufacturers.

This Gritzner GSZ, made by Pfaff, is first of the old sewing machines I bought . Beginners luck in the best possible way. This machine was hardly used, so it sews like new.

the Pfaff B was one of the earliest Pfaff sewing machines. Logic dictates the B follows the A. Though there was a Model A, I have never actually seen one advertised, so this 1891 B will be the senior of our Pfaff line up.

Later on Pfaff went from a letter designation to numbering the different machines. This is the Pfaff model 11. According to the serial number database this machine was manufactured in 1929. The vibrating shuttle model 11 started life as the ” K” and was a very popular machine in the 1920’s and 1930′ s. When the more modern, but heavier 30 and 130 series were introduced, the 11 was still available as a lighter option. 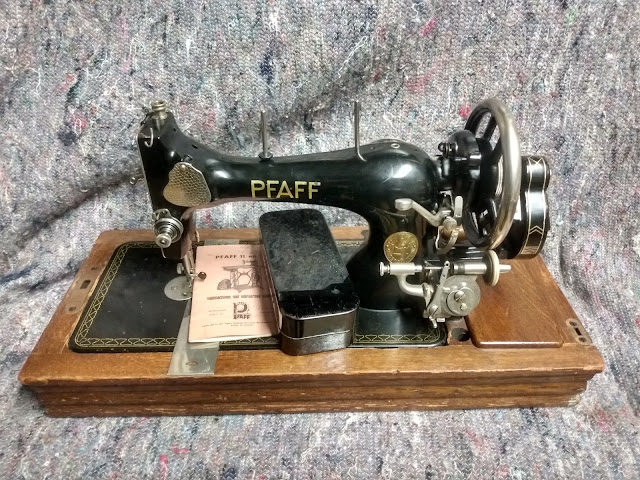 Here’s another Pfaff model 11. It was kindly provided by the son of the original owner and includes a dated bill of sale. The date reads the 3rd of december 1937 while the serial number matches the Pfaff serial number database at a date in 1936. This Singer 127/128 inspired machine is complete with an instruction manual in Dutch and the brown accessories box. Compared to the 1929 version the decorations on this machine are much more austere.

This 1951 Pfaff 130 treadle machine is just one year older than our Pfaff 30. Here you can clearly see the cleated drive belt and the big dial for the zigzag mechanism.

The Pfaff 30 looking very traditional and all steel. Built in 1952 according to the serial number. 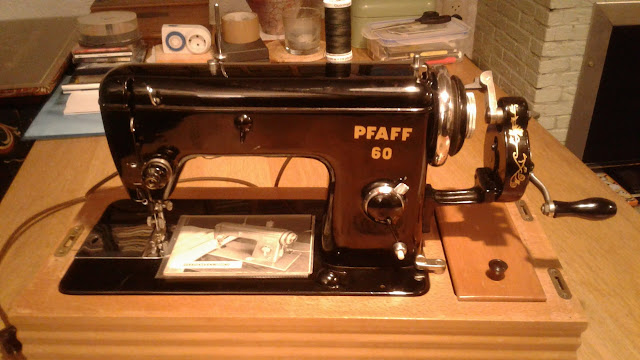 This redesigned Pfaff 60 is mechanically conventional but extremely strong . Though the design is more modern for 1955. It is not an electric machine, but there is an electric sewing light. This  machine saw very little use and came with a full set of accessories, a booklet and even the original bill of sale dated 1955.

This Pfaff 9 is almost too modern. Lighter than the 60, it is still a sturdy machine. Though very basic, it is a cleated belt machine like the 130.

This Seidel & Naumann is also a vibrating shuttle machine. One of the many machines inspired by the Singer 127/128.  These ” clones” were manufactured by different manufacturers in different countries and branded even more widely,

This 1903 Winselmann Hera came with our Pfaff 30. It is a very close copy of the Singer 28. Of course the decals are different and the bobbin winder looks much like the high version on the later 128.

This is another Winselmann marketed with the name of Eduard Rühl printed on the body.  This machine was distributed by Eduard Rühl in Nuremberg. The machine was found in Nuremberg and acquired there by the previous owner who kept it for around 50 years before kindly giving us care of the machine. The bed is decorated with a pretty picture of two birds.

This is a “Wilhelmina” branded sewing machine with a picture of the Dutch queen Wilhelmina who reigned from 1898 to 1948. This shows a young Wilhelmina, so it could be this machine was decorated to commemorate some anniversary, perhaps in 1918 or 1923 or even her coronation in 1898. The decorations look similar to the machines manufactured by Durkopp.

This Anker. Almost staid compared to the next one.

Teutonically heavy Kayser early Zigzag machine with twin tensioners to enable the use of twin needles for double stitchin.

1958 Gazelle “Primatic LP” treadle machine, manufactured by Haid und Neu in Germany. It was also sold under the name of “Harris”.

Of course we found another Gazelle after the first. This older one is a rather nice vibrating shuttle machine.

This Einer must be close to the earlier Japanese copy of the Singer 15. The tensioner is still at the left of the machine and the body shape is very similar to the Singer. Don’t let the Germanic name fool you. It’s built in Japan by Toyota, Brother or one of the other Japanese factories. 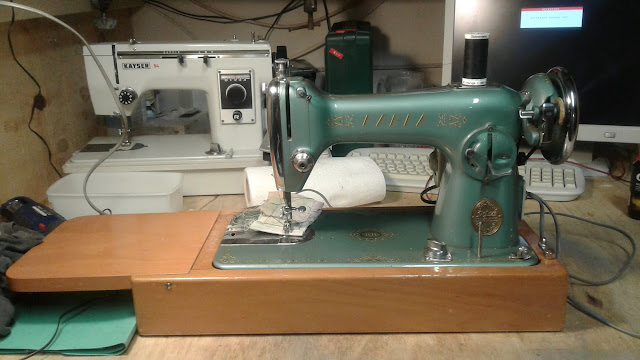 This Dabla De Luxe Sewing machine could be the next stage in the Japanese clone evolution with a more square body. It also looks much like a mix between Singer 15 and 99 with the repositioned tensioner compared to the earlier version.

This Einer must be our heaviest machine. You can see how the Singer clone evolved into a much larger and elaborate machine. They even included zig zag features. Even though the machines were cheaper than the Singers and Pfaffs, they were good quality and sewed well. 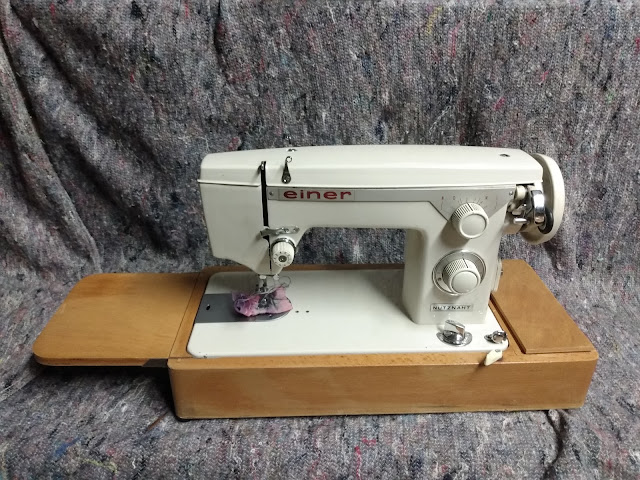 This strong and heavy Einer Deluxe Zig Zag sewing machine came to me as a very kind gift by the lady who has owned and used this machine for the past years. Despite the very German sounding name and script: “Nutznaht”,  the Einer was built in Japan, so it is a very strong and well built machine, typical of the later class 15 clones. Probably built in the 1970’s

This Victoria is a later Japanese free arm machine. Still quite heavy and internally all metal, but the badge is just a sticker, there are a few plastic knobs and buttons and the colour is a less fetching two tone grey.

This PMC Golden Stitch flat bed machine is very similar. Probably manufactured before 1964 according to rubber stamped service dates on the machine. A simple flatbed machine on a plastic base, but still with elaborate dials and chrome ” up” and ” down” controls.

Rambler Super Zig Zag. These very nice Japanese sewing machines were offered with various glorious names after ww2.  Some even had car brand names or names that were very similar to car brand names.

This Deluxe Packard is another Japanese American style machine

Chrome controls and dials look very automotive on our Packard.

Back to main page